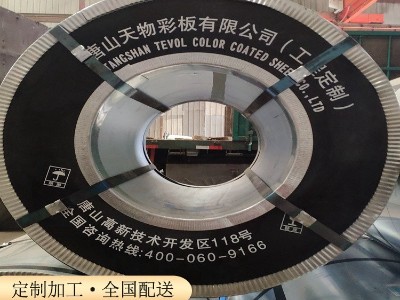 In case of water during thick shearing, the trench of thick shearing sometimes leaks and accumulates water, which may cause corrosion when aluminum foil contacts with water during shearing. But in fact, the trench leakage is a mixture of water, hydraulic oil, engine oil and so on. Because the oil is light and water is heavy, the aluminum foil first contacts with the oil, which forms a large area of oil spots rather than corrosion spots after annealing. In 1993, although many measures were taken to prevent leakage, the return volume of corrosion products still reached 174T. Obviously, this is not the reason.

Some people think that when hot coil packaging, the surrounding high temperature air condenses and forms water droplets, causing corrosion. In order to prove this conjecture, a roll of aluminum foil with a temperature of 60 ℃ was wrapped up with plastic cloth and placed for 7 days to check that there was no corrosion and no water droplets. After 2 months of packing, no corrosion was found, which proved that the hot roll would not cause corrosion of aluminum foil.
There is water in the compressed air. After the air is compressed, there is water precipitation. The water discharge of the air dryer is not clean, and there will be water droplets ejecting from the air roller cleaner. These large amounts of water will cause corrosion on the surface of aluminum foil. We made an experiment: during slitting, the water (pH = 4.6) produced by dipping the brush with compressed air was rolled on the surface of aluminum foil and then annealed. The results showed that the corrosion occurred the next day, which was white spot like and bent. There was no corrosion on the end face and the surface 50 mm away from the end face. After 6 months in the workshop, the corrosion did not develop further. The test shows that water in compressed air can cause aluminum foil corrosion, but only white spot corrosion, not strip and strip corrosion.
【相关推荐】